One of the Amazon reviewers of "Sun Performance and Tuning: Java and the Internet" gave it 3/5 stars. While still a nice introduction, the book by Adrian Cockcroft has become dated — claimed Roland in 2003, which believe it or not was 18 years ago. The book Roland reviewed was published in 1998, and it is a second edition. The first edition (1994) has a significantly different title: "Sparc & Solaris", is the focus instead of "Java and the Internet". Other than reflecting a major shift in Sun’s focus happened between '94, and '98, the two editions also have a different price tag. "Java and the Internet" costs 15.97 EUR, while one can get "Sparc & Solaris" used in allegedly Very Good conditions for 1.94. If I’m buying an outdated book I’m gonna get the most outdated version possible, I figured, plus imagine the embarrassment if someone would find a book about Java in my bookshelf. Shipping is 3 bucks, for a grand total of 4.94 EUR the book is in my hands 15 days after placing the order. 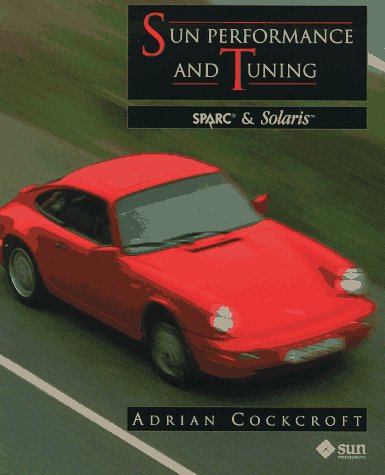 "The Porsche Book" is quick to explain the analogy between UNIX and the Porsche 911 featured on the cover: both were created in the '60s, in a form similar to the current one. Both represent the latest and greatest of products still around in 1994, and indeed 2021, despite their quirks.

A valid question at this point clearly is: why do you care about a book published 30 years ago when there’s so much recent and surely more useful material? One reason is that I find the history of Sun Microsystems particularly interesting. I’ve read and very much enjoyed High Noon as well as Sunburst — dealing with recent history there’s the privilege of having plenty of primary sources readily available, which is great. When it comes to the Porsche book, I find it fascinating to read about the most common usage scenarios of Sun servers in the '90s, and I can’t help but feel sorry for the admin who didn’t know that for SunOS 4, only filenames up to 14 characters long are cached in the Directory Name Lookup Cache (DNLC). In this article, however, I want to focus on the information contained in the book which is still valid today. In a world that moves as quickly as the world of computing, you could argue that all books are outdated to begin with. If some of the information in "Sun Performance and Tuning" was valid in 1994 and is still valid in 2021, there’s a good chance that it will still be valid 30 years from now.

It seems to me that we can categorize tech knowledge as follows: theoretical knowledge, generic practical information, and implementation details. Of the three, theoretical knowledge is the most likely to stay relevant with time, followed by generic practical information which might still apply some years later, and finally implementation details which are very likely to become irrelevant as time goes by. Those details are far from being useless however: in fact they provide the distinction between novice and experienced practitioner. To give an example: the chapter about Networks opens with a description of the built-in le network interface, pointing out that it shared its DMA connection with the SCSI interface. Crucially, the network interface had higher priority: heavy network activity was likely to reduce disk throughput. In 1994 you would have needed to see multiple workstations with bad disk performance before concluding that network traffic had anything to do with it — or read the book.

But what is the content that stood the test of time?

When performing a set of tests, there are multiple settings and knobs one can work with, each having various options to choose from. Which filesystem are we using? What’s the version of the application we’re testing? Kernel buffer size?

Throughput — the amount of work performed in a given amount of time — was a thing in the '60s, it’s the same thing today, and it will still be work/time in 2050. Your web server might have a maximum throughput of 10000 requests per second (rps), that’s something you can use to compare it with another one. Response time (latency) is defined as the amount of time the user has to wait. For example, how long did a given database transaction take. Utilization is how much of the computer’s resources were used to do the work. The values reported by sar and iostat, two tools very much still in use today, are an example of Utilization measures.

The author suggests taking multiple sar Utilization measurements at various load levels and combine them with awk to get an overview of how the system behaves. We do have Prometheus, Grafana, and friends nowadays, but the sar | awk idea is a useful reminder that quick, simple measurements can go a long way too!

vmstat and sar are described in detail, with a focus on runnable queue, blocked queue, swap usage, and so forth. The Linux versions of vmstat and sar from procps and sysstat are a bit different than the Solaris ones, but the main ideas still apply.

The three commands are also used in the Rules and Tunables Quick Reference Tables section. For each subsystem (Disk, Network, Memory, CPU), the author specified a list of Rules involving the commands and the action to take if the rule applies. Rules consist in the name of the command with any options, then a "." followed by the name of the variable to take into account. For example, the following indicates a disk bottleneck: 35% < iostat-D30.util < 65%. The action to take is to try balance the I/O load on other disks too, or get more disks.

A contemporary version of those rules for Linux would be great to have.

Interrupts in Solaris 2.2 were load-balanced among all available CPUs. The drawback was that, in case of heavy interrupt load from a given device, cache hit rate would suffer: the OS allowed to statically assign IRQs to CPUs as an improvement instead.

Nowadays a very similar problem occurs with the irqbalance daemon on Linux, which on systems doing lots of network activity should not be used. SMP affinity should instead be configured to ensure the interrupts of multiqueue network cards are statically mapped among CPUs.

There’s more information in "Sun Performance and Tuning" that can still provide valuable lessons today, as well as some true historical gems for those into such things. Go check it out on the Internet Archive if you’re interested!